“And when books are spread abroad.”.

3269. The reference seems to be to the vast circulation of newspapers, journals and books and to the system of libraries and reading rooms and such other places and means of spreading knowledge in the Latter Days. (Explanation by Malik Ghulam Farid Sb, edition 2002)

101. Secretary Isha’at will be responsible for publicising the activities of Lajna Imaillah Mulk and the outstanding activities of the Majalis.

102. Secretary Isha’at shall be responsible for printing and publishing newsletters, gazettes, periodicals and books which Lajna Imaillah Mulk decides to publish.

103. Secretary Isha’at shall maintain the income and expenditure account of all literature that was published under Lajna Ima’illah Mulk.

Note: A committee of three (3) members should be formed in the Majalis where Isha’at work is being undertaken, to inspect and assess that the material for publication is suitable for this purpose. 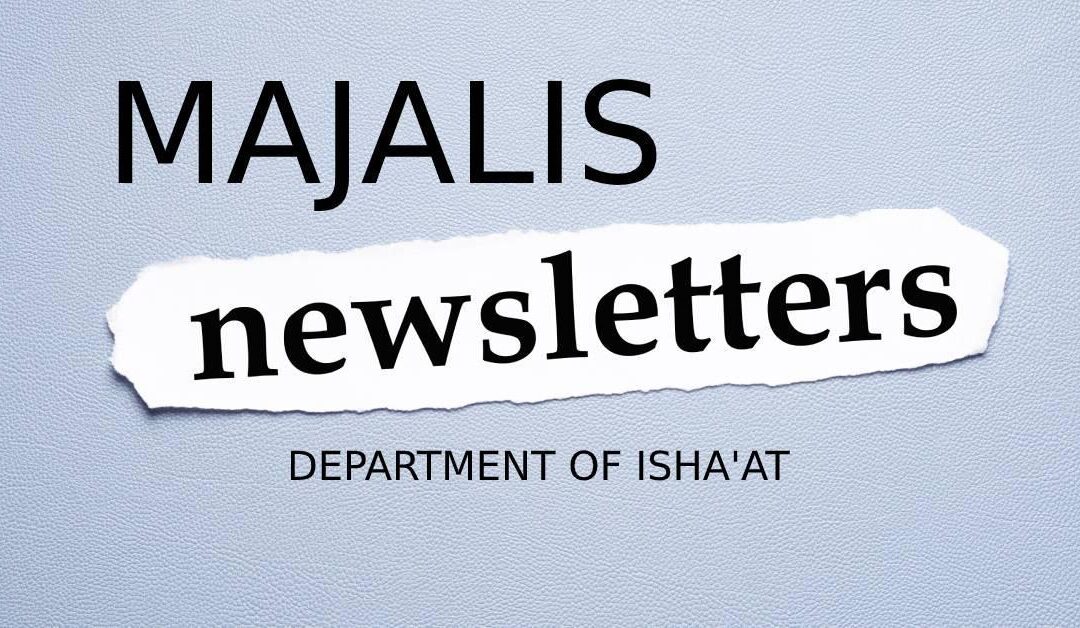 Hazrat Mirza Ghulam Ahmad, the Promised Messiah and Mahdi(as), was raised in this Age to reform the world at large. The Holy Prophet Muhammad (saw) had called him the Hakm and Adl. He had said that even if the Faith would have gone to Pleiades, he would bring it back. Indeed, he was to establish the Law of God and revive His noble religion. This, he did, along with other things, through his writings and discourses on various occasions.
Promised Messiah (AS) states in his book Fateh-Islam:

‘O, He the Most Wise, Most Powerful, let this workshop come into being by sending this humble one to undertake this work of reforming mankind. This workshop He had divided into several branches, all devoted to the dissemination of truth, the propagation of Islam. Of these branches one branch is concerned with the preparation of books, one of the tasks assigned to this humble one. To perform this task I have been gifted with special knowledge. Knowledge which is not within man’s capacity, which can be acquired only by the Help of God, which comes not of human effort but through the Holy Spirit. Instruction by the Holy Spirit has dissolved our difficulties’.
(Victory of Islam Page 10)
Hazrat Musleh Maud (RA) while talking about the importance of reading books of Promised Messiah states:
Read the books of the Promised Messiah (as) as God granted the Promised Messiah (as) Special knowledge. (The Promised Messiah (as)) says that every Prophet is given the use of particular weapons. And that my weapon is the Holy Quran. Therefore the books of the Promised Messiah (as) are an unequalled commentary of the Holy Quran.
And we have entered into the battlefield with satan. But if we enter this battlefield without any weapons then imagine how dangerous this situation will be for us. It is therefore essential for us, that we have in our hands an extremely sharp and powerful sword and that sword is the books of the promised Messiah.

Dear All,
Assalam’o’Alikum
Lajna Book store is an easy access for all lajna members to order books for their local Jama’ats or for their personal use.
It’s a great way of keeping your library updated.
Ordering with Lajna Isha’at is easy 3 step process
1- Check the current book list
2- Fill in pre-order form.
3- Send to In-charge book store.
Please note that time period of 7-10 days is required to process your order.

Remember to pay when you come & collect your order. Invoice will be sent to you beforehand according to availability of stock.

For any queries or price information please contact secishaat@lajnauk.org / 07854919181

MTA International is the television wing of our Ahmadiyya jama’at. Centrally it is managed with both quality and content. Alongside MTA International, its various studios around the world contribute to the programmes broadcast on this channel.
MTA has been established in most countries such as MTA Germany, MTA France, Africa, USA etc…
Therefore MTA UK is the desk that has been established in this country and we all come under the umbrella of MTA International. The differences between us and other countries is that we are based in the same country as MTA International, and in many ways we have more advantages due to being based right under the physical guidance of Khilafat. This should motivate and inspire us to want to try our every best to serve the Jama’at as much as possible.
The Lajna MTA UK team also has a part in making appropriate and interesting programmes for our international channel. We are open to different ideas for programmes, as long as they are appropriate and approval can be received for them; we are able to make all sorts of programmes. If anyone is interested with ideas, or has skills that can be of benefit for MTA UK then please email to lajnamtauk@gmail.com with your information.

This website uses cookies to improve your experience while you navigate through the website. Out of these, the cookies that are categorized as necessary are stored on your browser as they are essential for the working of basic functionalities of the website. We also use third-party cookies that help us analyze and understand how you use this website. These cookies will be stored in your browser only with your consent. You also have the option to opt-out of these cookies. But opting out of some of these cookies may affect your browsing experience.
Necessary Always Enabled
Necessary cookies are absolutely essential for the website to function properly. This category only includes cookies that ensures basic functionalities and security features of the website. These cookies do not store any personal information.
Non-necessary
Any cookies that may not be particularly necessary for the website to function and is used specifically to collect user personal data via analytics, ads, other embedded contents are termed as non-necessary cookies. It is mandatory to procure user consent prior to running these cookies on your website.
SAVE & ACCEPT